TINOSPORA CORDIFOLIA CAN PREVENT CORONA VIRUS AND MANY MORE DISEASES : 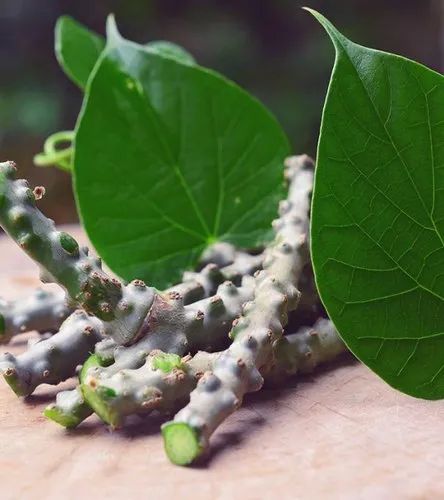 Basically Tinospora cordifolia is used for diabetes,high cholesterol,allergic rhinitis[hay fever]upset stomach,gout,lymphoma and other cancers,rheumatoid arthritis,hepatitis,peptic ulcer diseases,fever,gonorrhea,syphilis and to boost the immune system.Hence this Tinospora cordifolia boost the immune system it can PREVENT CORONA VIRUS.
IT HAS DIFFERENT NAME like Ambervel,Amrita,Gilo,Giloe,Giloya,Glunchanb,Guduchi,Gulancha,Gulvel,Gurcha,Heart Leaved,Moonseed,Heavenly Elixir,T. Cordifolia,TC,TCRC,TCRET etc.
Tinospora Cordifolia is a shrub that is native to India.Its root,stem and leaves are used in Ayurvedic medicine.
HOW DOES IT WORK?
It contains many different chemicals that might affect the body.It has antioxidants that might increase the activity of the body's immune system.Some chemicals might have activity against cancer cells in test animals.Most research has been done in test tubes or in animals.There is not enough information to know the effects of Tinospora Cordifolia in the human body.
SAFETY CONCERNS
Tinospora Cordifolia seems to be safe when used short term.The safety of long term use more than 8 week,is not known.
WARNING :
Pregnancy and breast feeding :Not enough is known about the use of Tinospora Cordifolia during pregnancy and breast feeding.Stay on the safe side and avoid use.
DIABETES :Tinospora Crdifolia might lower blood sugar levels.The doses of your diabetes medications might need to be adjusted.
"Autoimmune diseases" such as multiple sclerosis[MS],Lupus [systemic lupus erythematosus,SLE],rheumatoid arthritis or other conditions : Tinospora Cordifolia might cause the immune system to become more active and this could increase the symptoms of autoimmune diseases.If you have one of these conditions,it's best to avoid using Tinospora Cordifolia.
SURGERY :- Tinospora Cordifolia might affect blood sugar levels,so there is a concern that it might interfere with blood sugar control during and after surgery.Stop taking Tinospora Cordifolia at least 2 weeks before a scheduled surgery.
DOSING FOR TINOSPORA CORDIFOLIA :-The following doses have been studied in scientific research :-
BY MOUTH :-For alergic rhinitis [hay fever ]:300 mg of a specific Tinospora Cordifolia aqueous stem extract [Tinofend,Verdure Sciences ]three times daily for 8 weeks,which is same to fight with CORONA VIRUS.