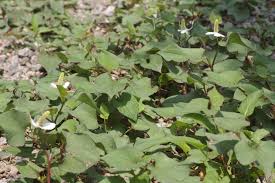 Heart leaf [Chameleon Plant] is used to treat the common cold,upper respiratory infections,fibromyalgia and diabetes.Some proponents of astragalus use it for its possible heart disease.They claim it may protect against heart disease.It's also used to help improve overall weakness.
Chameleon plant is also known as Houttuynia Cordata,fish mint,fish leaf is one of two species in the genus Houttuynia.It is a perennial flowering plant belonging to the genus Houttuynia emeiensis and in the Saururaceae.The plant is native to Southern China,Korea,Japan and Southeast Asia.It normally grows in most,shady locations.
HEALTH BENEFITS OF CHAMELEON PLANT :-
1. Diabetes :- Research shows that Chameleon plant consists of anti-diabetic properties.This plant is presently being experimented and examined in order to determine its pharmacological abilities in regulating blood sugar level in human beings.
2. Weight Management :- It is an anti-obesity property which can be frequently eaten to shed excess weight according to many research studies.
3. Herpes :- Chameleon plant can be given to patients suffering from herpes virus since the plant contains properties that are capable of inhibiting pseudo rabies herpes virus.
4. Immune System Support :- Research has shown that Chameleon plantmay help support the immune system by stimulating the production of lymphocytes,white blood cells that are crucial for the body's natural defense system.These white blood cells are occasionally referred to as natural killer cells and a plethora of research has found that these cells are important for promoting good health.Chameleon Plant,in this case,should be seen as just a natural component in an overall healthy lifestyle.Exercise,a vegetarian diet,and plenty of sunshine and sleep are also instrumental for supporting immune system function.
5. Cure For Environmental Sensitives :- Body produces histamine when you are allergic to a substance,a compound that initiates an immune response.Research demonstrates that Chameleon Plant has inhibitory effects on histamine release,possibly blocking it and reducing its effects.Researchers have even estimated Chameleon Plant's effects against allergies and asthma,issues partly characterized by excessive release of histamine.
6. Powerful Anti-oxidant :- It consists of polyphenols,potent compounds high in anti-oxidant activity that battle free radicals have a free unpaired electron and are often unstable.They damage other compounds,cells and DNA and research has linked free radicals to aging,cancer and many other ills.Chameleon Plant has been billed as an excellent free radical scavenger and helps neutralize circulating free radicals.
7. Protection Against Harmful Organisms :- Research shows that Chameleon Plant encourages intestinal balance by discouraging harmful bacteria from thriving in the digestive system.
TRADITIONAL USES OF CHAMELEON PLANT :
A. It is used internally in the treatment of many ailments including cancer,coughs,dysentery,enteritis and fever.
B, Its use is said to strengthen the immune system.
C. Externally,it is used in the treatment of snake bites and skin disorders.
D. Leaves and stems are collected during growing season and used fresh in decoction.
E. Leaf juice is antidote and astringent.Root extract is diuretic,root is also said to be used in medicinal preparations for certain diseases of women.
F. An active substance,effective in the treatment of stomach ulcers,has been extracted from the plant.
G. Leaf extract is used in dysentery,rhizome is used in stomach ulcers.Boiled extract of rhizomes is taken for muscular pains due to over strain.
H. It is a remedy for colds,indigestion,urinary and liver problems.Root is used as diuretic and leaves for measles and dysentery.
I. It is used as a treatment of upper and lower respiratory tract infections.